M’s Story (trigger warning: details of emotional abuse follows, make sure you are safe before continuing)

I took up painting in lockdown. I found a set of paints while tidying my cupboard that I had bought from Poundland and never got round to using them. I collected round flat stones suitable for painting on while out walking my dogs. I started to teach myself to paint by tracing diagrams out of books or off my laptop screen (I don’t have a printer) and then tracing the picture onto the stone so I had a outline to work on and paint, these were simple pictures like mushrooms or the moon. After a few weeks I felt I no longer needed to use tracing, so I started to paint freehand and use ideas that came into my mind instead of out of a book or off the internet as I was keen to see what I could achieve.

I was a child of the 1960s brought up by a narcissistic mother who coercively controlled me, in the days before the internet, mobile phones, and CCTV, also a time when children “didn’t have a voice”. She made me terrified of the outside world, and also frightened me of things within the house. I wasn’t allowed friends. I was so hungry I ate the coal in the coal shed, and the dogs food. I was told people/relatives didn’t like me and she was ashamed of the “person I had become”. When I was 12 she moved area with me to a remote house where I never saw anyone and wasn’t sent to school.

To the outside world my Mother would pretend to be this very giggly, kind person who appeared to be a little bit childlike and home loving, but behind closed doors it was very different as she was very nasty and cruel. As I was never allowed to play outside or have contact with friends or other families I thought my life was ‘normal’ but all the time she was brainwashing me, telling me I was horrible to her, that I wasn’t clever or attractive, how I had let her down and the family were ashamed of me because I was a cruel, hard hearted person who was nasty to her. However in reality, I was just a small girl. 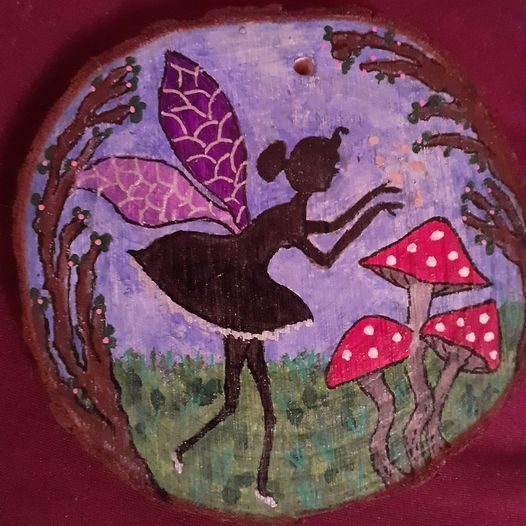 Recently, my confidence was given a boost when I posted photos of my paintings on Facebook and people inquired about buying them, and they complimented me on how good they were. I never expected that. I love using the rich rustic colours of Autumn as these are my favourite, but I also like to make my paintings bright and vibrant with eye catching colours that bring out the joy of the seasons, and bring a touch of ‘feel good’ to the person looking at them. I like my paintings to take myself, and others who look at them, to a relaxing place with a feeling of happiness and inner warmth, and bring a smile.  The little bit of ‘make believe’ in my themes acts as escapism, which is good for us all.

By the time I became an adult, my narcissistic mother had already demolished my life with her controlling, gaslighting, lying, and bullying. She had already convinced me I was useless, hard hearted, uncaring, unattractive, and of low intelligence. I would never dare disagree or voice my own opinion on anything as she would fly into a horrendous rage with me and throw things, or choose not to speak to me for days – just giving me evil looks. She convinced me I wasn’t capable of being employed, so my role in life was to stay at home and look after her. She would often take to her bed for several weeks and I would look after her. I rarely left the house, but when I did (and it was always for a reason related to her) she would fly into one of her rages and say I had been gone too long and she had been “worried to death” which made me feel very guilty. She always told me I owed it to her to look after her, as she claimed she had only stayed with my Dad so she could afford to bring me up and now I had to repay her. In reality my Dad had always been okay towards her but I think he was also frightened of her rages as she had been violent towards him.

My painting, ‘The Dapple Grey Horse’ comes from a recurring dream I had as a child, I would often think of ‘my friend’ the dapple horse when I was lonely or upset, and now he is immortalized in my paintings. I also wrote a poem about him.

Basically, my Mum ruined my whole life. My daughters have now grown up and left home and I live alone with my rescue dogs. I suffer with poor mental and physical health.

In the summer I love to sit outside in the garden to paint among the flowers and watch and listen to the birds. I enjoy watching my dogs play and sleep in the flowerbeds. In the colder months, when I paint indoors I bring some bits of the garden inside such as some ivy, and I bring in a branch and decorate it with my crafts just so I am still in touch with the seasons. Likewise I decorate a tree out in the garden with my crafts and ribbons and items that have belonged to dogs I have taken in who have now passed away. Where I live is very rural so I often take a few minutes to sit out in the garden after dark, when there is a whole new world and way of life out there and this also inspires my ideas for my painting. The moon and stars, the sound of owls and foxes and the lovely bats coming to say goodnight.

Thank you for reading my story.
M.

If you or someone you know may have experienced anything like what M has described here, there are services that you can talk to. We have listed them below.